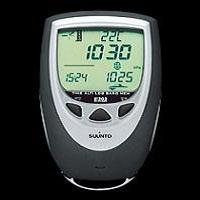 Although there are mercury barometers, these are not suitable for transport, that is why the exploration altimeter is basically a barometer with a metal case with strap, which instead of having a graduated pressure scale, has a scale of meters above sea level. above sea level).
Because the atmospheric pressure does not vary exclusively depending on the height, the scale becomes mobile so that it can be adjusted constantly and depending on the place where you work.

The operation of this instrument is based on the physical laws of atmospheric pressure. First of all it is necessary to talk about the atmosphere and its particularities. The atmosphere is defined as the layer of gases that surrounds a celestial body.

It has the following values:

Since atmospheric pressure is due to the weight of the air over a certain point on the earth's surface, it is logical to assume that the higher the point, the lower the pressure, since the amount of air at its top is also less. .

For example, in a mountain the amount of air that is in the highest part is less than that on a beach, due to the difference in level.

Taking sea level as a reference, where the atmospheric pressure has a value of 760 mm, it is found that, when measuring the pressure at the summit which is about 1,500 meters above sea level, the atmospheric pressure is approximately 635 mm ; that is, pressure decreases with height. According to the above, the greater the height of the earth's surface with respect to sea level, the lower the air pressure, since the glass column of the barometer that is above it is also smaller.

The decrease in pressure with height is not directly proportional since air is a fluid that can be highly compressed, so the air masses closest to the ground are compressed by the weight of the air in the upper layers and are therefore denser. Thus, close to sea level, a small rise in height implies a large drop in pressure, while at high altitudes you have to rise much more for the pressure to drop to the same extent.

Knowing that pressure decreases with height following a logarithmic curve, a barometer could be used to know what altitude we are at. But whoever has a mercury barometer at home will notice that the surface pressure is not always 760mmHg. This varies from day to day. So the invention of the altimeter would be nice if we could tell it what pressure there is at sea level so it can calculate altitude. In other words, the instrument needs a “reference zero”.

The altimeter knows the pressure, and by giving it an initial reference pressure, it tells us the altitude with respect to sea level.