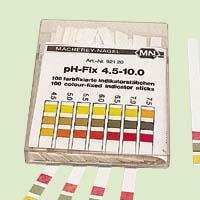 Sorensen was developing enzymatic studies and discovering that the degree of acidity was of fundamental importance for biochemical reactions. Later he and Linderstorm-Lang proposed a new definition of pH as the negative logarithm of the hydrogen ion activity

The formula for pH is analogous to the relationship between absorbance (A) and transmittance (T), that is, A = -log T. In this logarithmic function, however, the interval is normally narrower than the interval for pH. The important similarity is the logarithmic relationship, that is, for every decade of change in activity, the pH changes one unit. The extent of this relationship is illustrated in Figure 1. The factor of 10 between each pH unit shows the importance of measuring pH in tenths or hundredths of a unit.

The complexation of the hydrogen ion by water is a factor that affects the activity and applies to other ions, which partially complex or establish an equilibrium with the hydrogen ion. In other words. balances such as
H2CO3 __ H+ + HCO3-
HC2H3O2 __ H+ + C2H302-
they complex the ion, hydrogen such that it is not sensed by the pH measurement system. This, of course, is why an acid-base titration is performed if a total acid (H+) concentration is desired.

The factors that affect the activity coefficient are the temperature T, the ionic strength 1, the dielectric constant ε, the charge of the ion Zi, the size of the ion in Angstroms A, and the density of the solvent d. All of these factors are characteristic of the solution which relate activity to concentration.

A more exact definition of the salt effect is found using the Debye-Hükel equation. The other factors mentioned are used in defining their equation, thus showing their effect on the measurement.
The second effect is the effect of the medium which is designated as log ymH+. This effect relates the influence that the solvent will have on the activity of the hydrogen ion. This reflects the chemical and electrostatic interactions between the ion and the solvent, of which the main interaction is solvation. This effect can be related by comparing the standard free energy in a non-aqueous solvent and in water. For example, the activity of the hydrogen ion in ethanol is much larger (about 220 times) than in water.

However, if the obtained pH value is stable and can be related to some results, the activity of the hydrogen ion need not be known. The relative pH value can be used as an indicator to alter the process or to proceed in some corrective way if the pH value changes dramatically.

Thus, activity is related to concentration through the effect of the salt and the effect of the solvent. Activity measurement with the glass electrode is mainly influenced by ionic strength, temperature and solvent:
This means that the sample composition and conditions must be established when determining the pH if another person is to reproduce the results or if the pH value is to be compared. Solution pH is valid only at a particular temperature, ionic strength, and solvent.

Due to these influences, the pH value of a sample cannot be extrapolated to another temperature or dilution. If the pH value of a particular solution is known at 40°C, it is not automatically known at 25°C. Standard buffer solutions were tested at different temperatures and compositions to define their activity, and unless the same is done for the sample, their pH under different conditions is not known due to these variables.