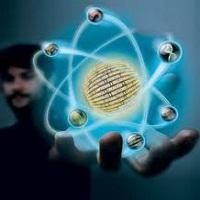 Quantum chemistry is a branch of theoretical chemistry where quantum mechanics and quantum field theory are applied.

Quantum chemistry mathematically describes the fundamental behavior of matter on a molecular scale. An application of quantum chemistry is the study of the behavior of atoms and molecules, in terms of their optical, electrical, magnetic and mechanical properties, and also their chemical reactivity, their redox properties, etc., but materials are also studied, both solid extended as surfaces.

The study of quantum chemistry has a strong and active relationship with some scientific fields such as molecular physics, atomic physics and physical chemistry, and contributions have been made by both physicists and chemists. The first calculation in quantum chemistry is often considered to be that carried out by the German scientists Walter Heitler and Fritz London (although Heitler and London are often considered physicists). The Heitler and London method was refined by the American chemists John C. Slater and Linus Pauling, to become the valence bond method (or Heitler-London-Slater-Pauling (HLSP)). In this method, particular attention is paid to the interactions between pairs of atoms, and therefore it is closely related to the classical schemes of bonds between atoms.

Friedrich Hund and Robert S. Mulliken developed an alternative method, in which electrons were described by mathematical functions delocalized throughout the molecule. The Hund-Mulliken (or molecular orbital) method is less intuitive to chemists, but, having been found to be more powerful in predicting properties than the valence bond method, it is virtually the only method used in recent years. years.