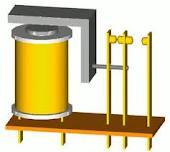 An electromagnet is a type of magnet in which the magnetic field is produced by the flow of an electric current, disappearing as soon as said current ceases.

In 1819, the Danish physicist Hans Christian Ørsted discovered that an electric current flowing through a conductor produces a magnetic effect that can be detected with the help of a compass. Based on his observations, the British electrician William Sturgeon invented the electromagnet in 1825. The first electromagnet was a horseshoe-shaped piece of iron wrapped around a coil wound on it. Sturgeon demonstrated his power by lifting 4 kg with a 200 g piece of iron wrapped in wires through which he ran current from a battery. Sturgeon could regulate the electromagnet in it, which was the beginning of the use of electrical energy in useful and controllable machines, laying the foundation for large-scale electronic communications.

The simplest type of electromagnet is a coiled piece of wire. A coil in the shape of a straight tube (similar to a screw) is called a solenoid, and when it is also curved so that the ends coincide, it is called a toroid. Much stronger magnetic fields can be produced if a 'core' of paramagnetic or ferromagnetic material (usually soft iron or ferrite, although so-called electrical steel is also used) is placed inside the coil. The core concentrates the magnetic field, which can then be much stronger than that of the coil itself.

Magnetic fields generated by coils are oriented according to the right-hand rule. If the fingers of the right hand are closed around the direction of the current flowing through the coil, the thumb indicates the direction of the field inside the coil. The side of the magnet from which the field lines exit is defined as the "north pole."

In addition, induced currents are created within the coil when it is subjected to a variable flux. These currents are called eddy currents and are generally undesirable as they heat up the core and cause power loss.

The main advantage of an electromagnet over a permanent magnet is that the magnetic field can be quickly manipulated over a wide range by controlling the amount of electric current. However, a continuous source of electrical power is needed to maintain the field.
When a current passes through the coil, small magnetic regions within the material, called magnetic domains, align with the applied field, causing the magnetic field strength to increase. If the current increases, all the domains will end up lining up, a condition called saturation. When the core becomes saturated, a further increase in current will cause only a relatively small increase in the magnetic field. In some materials, some domains may realign themselves. In this case, part of the original magnetic field will persist even after the current is removed, causing the core to behave like a permanent magnet. This phenomenon, called remanence, is due to the hysteresis of the material. Applying a decreasing alternating current to the coil, removing the core and hitting or heating it above its Curie point will reorient the domains, causing the residual field to weaken or disappear.
In applications where a changing magnetic field is not needed, permanent magnets are often superior. Also, it is possible to make permanent magnets that produce stronger magnetic fields than a similarly sized electromagnet.

Devices that use electromagnets

Electromagnets are used in many situations where a rapidly or easily varying magnetic field is needed. Many of these applications involve the deflection of beams of charged particles, as in the case of the cathode ray tube and the mass spectrometer.