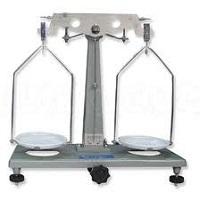 The balance is a lever of the first kind with equal arms that, by establishing a situation of equilibrium between the weights of two bodies, allows masses to be measured. Like a Roman, or a scale, it is a measuring instrument that allows you to measure the mass of an object.

Mass standards are used to make the measurements, the degree of accuracy of which depends on the precision of the instrument. As in a Roman, but unlike a balance or a dynamometer, the results of the measurements do not vary with the magnitude of the acceleration of gravity.

The range of measurement and precision of a scale can vary from several kilograms (with a precision of grams), in industrial and commercial scales; down to a few grams (accurate to milligrams) on laboratory balances.

One of the oldest representations of a scale: Anubis weighing the heart at the trial of Osiris, painted on papyrus.

The balance is already represented in Ancient Egypt in numerous bas-reliefs and papyri. In the Book of the Dead, dating from the second millennium B.C. C., the balance of saucers appears, hanging from the ends of the arm, suspended from a central support, to compare the weight of the heart of the deceased, symbol of his acts, with that of the feather of the goddess Maat, symbol of Justice and Universal Order.

Among the balances found in the Museum of Naples, discovered in Pompeii, four different classes are observed:

of two saucers, with a weight that can run through one of the arms,
from a saucer, hanging from the lever arm a movable weight,
of hooks, without saucers, which is known by the name of Roman.

In Rome this balance was popularized. Its two arms have different lengths and the object to be weighed hangs from the shorter one. A weight or pylon slides along the long arm until the arms are in balance. Marks on the pylon arm indicate the weight of the object. By using the lever principle, it has the advantage that the pylon can be of much less mass than the object to be measured;
the balance for liquids as a saucepan with a long handle that acts as a Roman arm.

Weights usually have some number or numerical scale engraved on them; and they are generally made of one of the following materials: bronze, lead, stone and even baked clay. When they do not carry a sign of any kind, they denounce greater antiquity because until the empire of Octavio Augustus the magistracy in charge of indicating and monitoring the measurement of weights was not established in Rome or in its provinces, although previously some weights were indicated.

Balance for food in bakery.

Scales are used to weigh foods that are sold in bulk, by weight: meat, fish, fruit, etc. With the same purpose, it can be used in homes to weigh the foods that make up a recipe. They are also used in laboratories to weigh small mass quantities of reagents for chemical or biological analysis. These balances stand out for their great precision. Many applications have become obsolete due to the appearance of electronic scales.

Let us consider a homogeneous and rigid bar AB whose ends are suspended two bodies, A and B, of respective masses m_{A}, and m_{B},, to which correspond some weights P_{A}, and P_text{B }, the result of the action of the earth's gravitational field on them. If the bar is supported at its midpoint, O (support that allows the bar to rotate around a horizontal axis passing through O), the second equilibrium condition, which expresses that the dynamic moment is null, taking moments in Or, it is written in the form

whence, being OA = OB, the equality of the weights of the two bodies follows

for the case that the acceleration of gravity does not vary under one pan of the balance, in relation to that of the other pan of the same, it will be fulfilled that: of these the equality of the masses since

so that with the balance, although weights are compared, masses are balanced and measured.

But if a balance were built large enough for one saucer to be located in an area where the acceleration due to gravity was different from the area of ​​the other saucer, then the balance would no longer measure masses but weights.

The analytical balance is an instrument used in the laboratory, which is used to measure mass. Their most important feature is that they have very little uncertainty, which makes them ideal for use in very precise measurements.

Analytical balances are usually digital, and some can display information in different systems of units. For example, the mass of a substance can be displayed in grams, with an uncertainty of 0.00001g. (0.01mg)