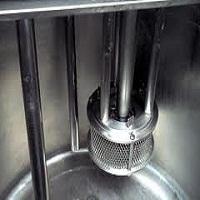 A homogenizer is an item of laboratory equipment used for the homogenization of different types of materials, such as tissues, plants, food, soil, and many others. In Biology and Biochemistry, homogenizers try to disintegrate tissues and break cells, with the least damage to the plasma membrane.

Homogenization is a very common step in the preparation of biological samples prior to analysis of nucleic acids and proteins, or the study of cells, metabolism, pathogens, and many other targets.

The cell rupture process can be produced by three mechanisms:

Utensils used as a homogenizer

Many models have been developed using different physical technologies for disintegration. The pestle and mortar, used for thousands of years, is a standard tool, even in modern laboratories. Other more modern solutions are based on instruments such as blenders or grinders (also used in the kitchen), blade grinders, high-pressure ultrasonic treatment, and other physical devices.

The following table offers an overview of these instruments, their theoretical basis and the type of materials on which they are most effective.