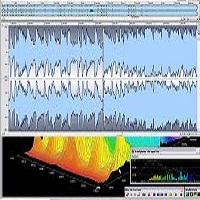 Sonication is the act of applying sound energy (usually ultrasound) to agitate the particles of a sample, for various scientific or industrial purposes.

An electrical current transmits its energy to a mechanical system that converts it into high-intensity vibrations that generate ultrasound waves. The ultrasounds, in turn, generate vibrations in the target material. If it contains liquids, millions of microscopic bubbles will be generated, which undergo very rapid expansion and collapse processes that can transmit their energy to other materials. This phenomenon is called cavitation and can be increased by adding tiny glass spheres to the medium.

On a paper machine, an ultrasonic sheet can distribute the cellulose fibers more evenly and strengthen the paper.
Sonication can be used to accelerate the dissolution of solids by breaking down intermolecular interactions. It is especially useful when sample mixing is not possible, such as with NMR tubes.

It can also be used to provide the energy for certain chemical reactions to continue.
Sonication can be used to remove dissolved gases from liquids (degassing) by applying sound energy to the liquid while it is under vacuum. This is an alternative to freeze-vacuum-thaw and spray methods.

In biological applications, ultrasound may be sufficient to disrupt or deactivate a biological material. For example, ultrasound is often used to rupture cell membranes and release cell contents, due to the intense agitation produced. This process is called sonoporation. Depending on the frequency, intensity and energy applied, even subcellular structures can be destroyed or protein complexes soluble. To avoid protein denaturation caused by overheating, sonication is usually applied cold.[1] Sonication is also used to fragment DNA molecules.

Another recent medical application uses the rupture of adipocyte membranes as a technique for reducing cellulite and localized bags of fatty tissue.

Sonication is commonly used in nanotechnology to evenly disperse nanoparticles in liquids.

Sonication is the mechanism used in ultrasonic cleaning, detaching particles adhering to surfaces. Outside of the field of science laboratories, sonication baths are used to clean objects such as glasses and jewelry.

In paleontology, sonication is also used to extract microfossils from rock.

The term sonication can also be used as a synonym for vibratile pollination, the process bees use to shake pollen off flowers by vibrating their wing muscles.