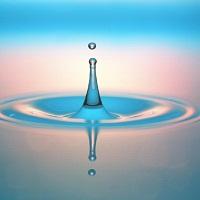 Distillation is itself the basic process of the water cycle in nature. The water is evaporated by the heat of the sun forming the clouds and later cooled and condensed in the form of rain, snow or hail.
Similarly, the distiller heats the water until it boils, remaining sterilized, passes to the cooler and finally condenses into 100% chemically pure water.

Distilled water is one whose composition is based on the unit of H2O molecules. It is the one from which impurities and ions have been removed by distillation. Distillation is a disused method for the production of pure water at an industrial level. This consists of separating the liquid components of a mixture.

Due to its relatively high purity, some physical properties of this type of water are significantly different from those of everyday drinking water. For example, the conductivity of distilled water is almost zero (depending on the degree of distillation) because, unlike ordinary tap water, it lacks many ions that produce conductivity, usually chlorides, calcium, magnesium and fluorides.
In chemical experimentation, a phenomenon that exists in any liquid or solution that is free of macroscopic impurities, such as distilled water, is that it can be heated in a microwave oven above its boiling point without boiling. Only when this liquid is shaken violently or impurities such as dust particles or crystals (for example, sodium chloride (common salt) or sugar) are added to it, does it boil suddenly and explosively, possibly causing burns.

Distilled water is H2O with no added compounds. Water is part of the human body.

The purification of water is applied to water not suitable for human consumption, which sometimes undergoes processes to kill microorganisms and extract particles and metals that may be harmful to the body. Distilled water, being free of these compounds, does not require purification.
In purification, a very small amount of chlorine is often used, which is not harmful to a person's health. Its intake is considered medically inappropriate except as a resource for purification and to avoid worse evils. Alexis Carrel - Nobel Prize for Medicine in 1912 - even came to relate water to immortality based on his relationship with life. The cell is immortal. It is actually the fluid in which it floats, basically water, that degenerates. Therefore, by renewing this fluid at intervals, we would provide the cells with what they need for their nourishment, and as far as we know, the pulse of life would continue forever. During the early 20th century, medicine and biology defended the purity of water for consumption, and hygienist doctors recommended the intake of distilled water.

With the appearance of the bottled water business and the improvement of supply in urban networks, studies began to be carried out on the positive physiological effects of ingesting compounds in addition to pure H2O, which appear in drinking water and also in bottled water. Among these explanations is that deionized distilled water lacks fluoride ions, which are added to bottled waters to prevent tooth decay. Due to this lack, regular consumption of distilled water could increase the risk of caries. Similarly, there is the explanation that distilled water lacks mineral salts that our body needs. Pseudo-science defends the consumption of distilled water on the grounds that the contribution of salts to our body comes from the intake of food and not from water, the amount of salts that water gives us being a totally negligible contribution. In fact, there are several brands of commercial waters called "weak mineralization" that are practically distilled waters, and that are normally marketed often at a higher price for their good reputation for health.

However, the consumption of distilled water, in addition to laxative, can cause physiological weakness due to the lack of minerals that help hydrate the body. By consuming distilled water, the body will excrete it through the urine and will dehydrate.

Use of distilled water as a drink

The purification of tap water as well as the bottled water market means that the use of distilled water as a beverage is no longer frequent. However, many beverage manufacturers use it as a base for their products to ensure its purity and good taste. It can also be found bottled in supermarkets, ready to drink. The use of water purification techniques, such as distillation, is common in places where there is no affordable source of drinking water or the water that can be obtained is not fit for drinking.

In many homes, it is common to use filters, such as ion exchange resins that remove part of the calcium and magnesium ions that "harden" the water to make it drinkable or remove its odour, but the appearance of domestic reverse osmosis devices (such as those used in desalination plants) has allowed the consumption of much purer and almost distilled water. The domestic device that ensures 100% totally distilled water is the distiller, although it does not seem to be very common on the market.

Drinking water supplied in urban networks comes from rivers and springs that are also waste streams for industry and agriculture, so they contain harmful metals and microorganisms. To ensure safety levels, it is subjected to repeated processes through osmosis, ozone, ultraviolet and chlorination. It is very common that there are large amounts of chlorine to ensure its potability. Despite these processes, throughout the journey through the network to homes, the water accumulates all kinds of waste since it was treated in the water treatment plants. VOCs (Volatile Organic Compounds), fluorides, and 75,000 other different species of compounds are often found that are not removed by traditional purification techniques, but virtually disappear when water is distilled. The presence of carcinogenic compounds such as boron has been denounced in several large cities, especially trihalomethanes The presence of trihalomethanes is controversial, because although safe levels are advocated in drinking water, it has been scientifically proven that they are very dangerous and carcinogenic when inhaled in showers, baths and other common activities.

Distillation is also a technique applied to make sea water drinkable. It is an energetically expensive technique. Common in military missions such as in the recent Gulf or Iraq wars to supply troops, it is also applied to nuclear-powered ships by having access to an intense and affordable heat source, also using it as a coolant for the nuclear reactor. In desalination plants for the consumption of the civilian population, distillation is infrequent since significant amounts of energy are required. Instead of distillation, techniques such as reverse osmosis are used. It is worth mentioning that the writer Alberto Vázquez-Figueroa relied on a team of engineers to develop a natural osmosis system with hardly any energy expenditure, whose patents have been developed and have been successfully tested. Currently there are already some desalination plants installed with this system, but despite the generous approach of its creators in the delivery of patents, the presence of systems that facilitate access to water has not been extended for political reasons. In fact, the underground reserves of African countries with drought are among the largest in the world, but there are no projects to meet the demands of the population and avoid the hundreds of thousands of deaths each year due to drought.

Distilled water according to Alternative Medicine

The consumption of distilled water continues to be recommended today by alternative medicine sectors, just as it was since the end of the 19th century.
Despite the fact that water is present everywhere and therefore access to water for consumption should be easy, the water market is part of large economic and geopolitical interests where the message that it is necessary to buy water is spread in societies, so the normal consumption of distilled water is not very widespread. There are low-profile scientific studies that encourage the consumption of bottled water. They are often used or promoted by commercial brands to advertise their waters as preventive against cavities, as dietary supplements or as a remedy for diseases. Thus, the Journal of General Internal Medicine published a study on the mineral content of different waters for public consumption in the US. The study concluded that "the water accessible to most Americans can contain high concentrations of calcium, magnesium and sodium , and these amounts could represent an important part of the daily intake of these elements. Doctors should persuade patients to check these amounts in the water they drink daily, and make decisions based on these data." The study concludes that since distilled water does not contain dissolved mineral salts, they should come from the diet. However, scientific data shows that the amount of salts in the water is so negligible that with the normal common intake of food during the day there is never such a deficit.

It should also be noted that even if bottled water is consumed, there are currently no robust criteria that visibly reassure the consumer that they are not actually buying distilled water in the belief that it is mineral or spring water, and that the rules on its provenance are often show useless. The consumer is often buying water that they do not know where it comes from, or that is simply tap water subjected to osmosis, distillation or UV processes, as they could do at home with domestic appliances.

Problems with supply networks, concerns about health, unethical business practices and consumer-friendly technology are creating a new market for water purification and distillation that makes the poor poorer.