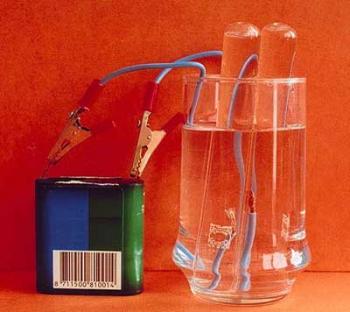 The electrolysis It is the process that separates the elements of a compound by means of electricity.

The easiest way to remember all this terminology is by looking at the Greek root of the words. Odos means road. Electrode is the path along which the electrons go. Catha means downward (catacomb, catastrophe). Cathode is the path where the electrons fall. Anas mean upwards. Anode is the path by which the electrons ascend. Ion means walker. Anion goes to the anode and cation goes to the cathode. The nomenclature is also used in batteries. An easy way to remember the terminology is also taking into account the first letter of each electrode and associate it with the process that occurs in it; that is to say: oxidation occurs at the anode (both words begin with vowels) and reduction occurs at the cathode (both words begin with consonants).
The energy needed to separate the ions and increase their concentration at the electrodes is provided by the power supply.

In the electrodes there is a transfer of electrons between them and the ions, producing new substances. Negative ions or anions donate electrons to the anode (+) and positive ions or cations take electrons from the cathode (-).

In short, what happens is an oxidation-reduction reaction, where the power supply is responsible for providing the necessary energy.

If the water is not distilled, the electrolysis not only separates the oxygen and hydrogen, but also the other components that are present such as salts, metals and some other minerals (what makes the water conduct electricity is not pure H2O, but which are minerals. If water were distilled and 100% pure, it would have no conductivity.)

It is important to make several considerations:

The electrodes should never be joined, since the electric current will not get the process and the battery will overheat and burn.

The electrolysis must be done in such a way that the two released gases do not come into contact, otherwise they would produce a dangerously explosive mixture (since the resulting oxygen and hydrogen are in stoichiometric proportion).

One way to make water again is by exposing it to a catalyst. The most common is heat; another is platinum in the form of fine wool or powder.

The second case must be done very carefully, incorporating small amounts of hydrogen in the presence of oxygen and the catalyst, so that the hydrogen burns gently, producing a faint flame. The opposite should never be done.

The electrolysis of a saline solution allows the production of hypochlorite (chlorine): this method is used to achieve ecological chlorination of swimming pool water.

Electrometallurgy is a process for separating pure metal from compounds using electrolysis. For example, sodium hydroxide is separated into pure sodium, pure oxygen, and water.

Anodizing is used to protect metals from corrosion.

Electroplating, also used to prevent corrosion of metals, creates a thin film of a less corrosive metal on another metal.