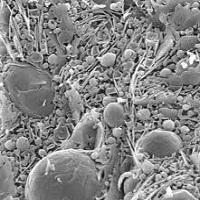 An emulsion is a mixture of immiscible liquids in a more or less homogeneous way. One liquid (the dispersed phase) is dispersed in another (the continuous phase or dispersing phase). Many emulsions are oil/water emulsions, with dietary fats being one of the most common types of oils found in everyday life. Examples of emulsions include butter and margarine, milk and cream, espresso, mayonnaise, the photosensitive side of photographic film, magma, and cutting oil used in metallurgy. In the case of butter and margarine, the fat surrounds the water droplets (in a water-in-oil emulsion); in milk and cream the water surrounds the fat droplets (in an oil-in-water emulsion). In certain types of magma, globules of liquid ferro-nickel may be dispersed within a continuous phase of liquid silicate. The process in which emulsions are prepared is called emulsification.

Emulsions are part of a more generic class of two-phase systems of matter called colloids. Although the terms colloid and emulsion are sometimes used interchangeably, emulsions tend to imply that both the dispersed and continuous phases are liquid.

Whether an emulsion becomes a water-in-oil emulsion or an oil-in-water emulsion depends on the volume fraction of both phases and the type of emulsifier. Generally, Bancroft's rule applies: emulsifiers and emulsifying particles tend to promote dispersion of the phase in which they do not dissolve very well; for example, proteins dissolve better in water than in oil so they tend to form oil-in-water emulsions (this is why they encourage the dispersion of oil droplets through a continuous phase of water).

The basic color of emulsions is white. If the emulsion is diluted, the Tyndall effect spreads the light and distorts the color to blue; if it is concentrated, the color is distorted towards yellow. This phenomenon can be easily seen when comparing skim milk (no or low fat) with cream (with high concentrations of milk fat). Microemulsions and nanoemulsions tend to be clear due to the small size of the disperse phase.

An emulsifier (also called an emulsifier) ​​is a substance that stabilizes an emulsion, often a surfactant. Examples of emulsifying foods are egg yolk (where the main emulsifying chemical is lecithin), honey, and mustard, where a variety of chemicals in the mucilage around the seed pod act as an emulsifier; low molecular weight proteins and emulsifiers are the most common. In some cases, the particles can stabilize emulsions through a mechanism called Pickering stabilization. Both mayonnaise and hollandaise sauce are oil-in-water emulsions that are stabilized with lecithin from egg yolks. Detergents are another class of surfactant, and can chemically interact with both oil and water, thus stabilizing the interface between suspended oil or water droplets. This principle is exploited in soap by removing grease for cleaning purposes. A wide variety of emulsifiers are used in pharmacy to prepare emulsions such as creams and lotions. Common examples include emulsifying wax, cetearyl alcohol, polysorbate 20, and ceteareth 20.[1]

Sometimes the internal phase itself can act as an emulsifier, and the result is a nanoemulsion – the internal state is dispersed in nanometer-sized droplets within the external phase. A well-known example of this phenomenon occurs when water is poured into an anise-based high-alcohol beverage such as ouzo, pastis, or raki. The anisolic components, which are soluble in ethanol, form nanometer-sized droplets and emulsify within water. The color of this diluted drink is opaque and milky.

20 ml ampoule of 1% propofol emulsion, used for intravenous injection. Manufacturers emulsify the lipid soluble propofol in a mixture of water, soybean oil, and egg yolk lecithin. In medicine,[2] microscopic emulsions are used to deliver vaccines and kill microbes. Typically, the emulsions used in these techniques are soybean oil nanoemulsions, with particles 400 to 600 nanometers in diameter.[3] The process is not chemical, like other types of anti-pathogen treatments, but it is physical.

The droplets are small and have a high surface tension, therefore the binding force with other lipids is greater. The oil is emulsified with detergents to stabilize the emulsion (the droplets can't stick together), so they meet another class of lipids with a bacterial membrane or some virus coat, forcing the lipids to bond with each other. the others. On a mass scale, it effectively disintegrates the membrane and kills the pathogen.

It should be noted that the soybean oil emulsion does not cause damage to normal human cells or the cells of most higher organisms. The exceptions are sperm and blood cells, which are vulnerable to nanoemulsions due to their membrane structures. For this reason, nanoemulsions of this type are not used in intravenous applications.

The most effective application of this type of nanoemulsion is for surface disinfection. Some types of nanoemulsions have been shown to be effective in killing HIV-1 and various tuberculosis pathogens, for example, on non-porous surfaces.