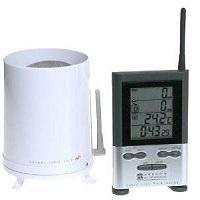 A rain gauge is a device used to measure the amount of precipitation that has fallen over a certain period of time. The basic idea of ​​this device rests on the fact that rain is measured by the number of millimeters that the water would reach on a perfectly horizontal ground, which did not have any type of filtration or loss. Countless devices have been devised for this purpose, but in order to make the measurements uniform, the WMO (World Meteorological Organization) recommends a series of standards aimed at ensuring that the measurements, on the one hand, have adequate precision and, on the other, are capable of avoiding multiple errors that would make the measures unfeasible and absurd.

The basic design of a rain gauge consists of an upper opening (of known area) for water to enter the container, which is then directed through a funnel to a collector where it is collected and can be measured visually with a graduated ruler or by weight. of the deposited water.

The most common rain gauge, used today by airports and official meteorologists, was invented more than 100 years ago. It is a 50cm high cylinder with a 20cm diameter funnel. The height of the water that collects in the measuring tube is precisely ten times what it would be if it had collected in the cylinder alone. This exaggeration of the height of the water in the tube allows meteorologists to make more precise measurements of rainfall.

The official rain gauge can measure up to 5 cm (1.97 inches) of rain.
If the rainfall exceeds five centimeters, the water spills and falls into the cylinder that surrounds the measuring tube. To calculate the total amount of precipitation, the observer empties the 5 cm of the full measuring tube, then takes the water from the cylinder and very carefully pours it into the new empty tube. That measurement added to the 5cm of the final precipitation amount.

In 1622, British architect Sir Christopher Wren designed the first drop tube rain gauge. The drop tube rain gauge is still widely used, but uses electronic measuring devices instead of paper tape to record volume and time of precipitation. The discharge tube rain gauge records the time when one of the two essentially designed buckets tips, which happens when a particular volume of water falls into it (usually 0.1cm or 0.1in). tilts, the other moves into place to catch the next precipitation unit. Every time a bulb tilts, an electronic signal is sent to a recorder connected to a clock. In most rain gauges, the water comes out the bottom; it does not need to be emptied manually. This device allows you to determine how much rain fell during certain periods without anyone actually being present at the weather station. In addition to knowing the volume of rain that has fallen in the period, it is also useful to know the intensity.

This rain gauge is especially good at measuring drizzle to medium rainfall, the rain that collects in a bucket may not be enough to tip it and may evaporate before more collects. During a heavy drizzle, such as thunderstorms, water may continue to pour into the bucket as it empties, before the next bucket is moved from its spot. The Dump Bucket Rain Gauge underestimates rainfall, hail, snow, bird nests, insects, cobwebs and leaves can block the funnel and cause water to overflow. That is why the independent rain gauges stand next to each other, so any errors can be quickly detected and corrected.

Another variety is the scale rain gauge. It consists of a container placed on a scale that fits the container and calculates the weight of the rainwater that collects. 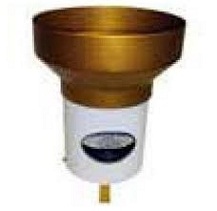