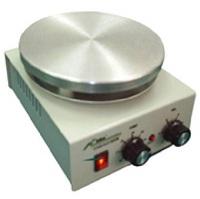 The hot plate or heating agitator plate has been developed with the purpose of being able to heating and mixing fluids contained in laboratory vessels such as the Erlenmeyer flask, test tubes and beaker tubes.

Usually the hot plate with stirrer has a flat surface on which the containers containing the fluids to be heated or stirred, or heated and stirred, are placed. Said surface is manufactured with materials that are characterized by being good thermal conductors such as aluminum or ceramic materials.

Hot plates have also been developed that exclusively use infrared-type radiation sources (infrared light) to heat. The hot plates with agitator have a heating element (an electrical resistance), a control system (on or off, temperature control, agitation control and its respective motor)

A magnetic stirrer consists of a small magnetic bar (called a stir bar) which is normally covered by a layer of plastic (usually Teflon) and a plate below which is a rotating magnet or series of electromagnets arranged in a circular pattern. circular in order to create a rotating magnetic field. It is very common for such a plate to have an arrangement of electrical resistances in order to provide it with the necessary heat to heat some chemical solutions. During the operation of a typical magnetic stirrer, the magnetic stirring bar (also called a magnetic flea, bean, or bullet) is slid into a container, either a borosilicate glass flask or beaker, preferably containing some liquid for stirring. The container is placed on top of the plate where the magnetic fields or the rotating magnet exert their influence on the coated magnet and promote its mechanical rotation.

Magnetic stirrers are preferred over gear drives because they are quieter, more efficient, and have no moving parts to break or wear out (just the stir bar itself). Due to its small size, the stir bar is easier to clean and sterilize than other stirring devices.

Magnetic stirrers solve two major problems by being used instead of motorized stirrers. First, motorized stirrers require the use of lubricants, which can eventually contaminate the reagents. Second, in a motorized agitator, hermetically sealing the rotating mechanical connection of the motorized agitator can be a problem in the case of a closed system, or due to environmental regulation or because it is a process in which there must be an absence of dust, water or oxygen.

The magnetic stirrer also has its drawbacks, the limited dimensions of the stir bar mean that it can only be used for laboratory level experiments (small scale or chemical analysis). In addition, viscous liquids or thick suspensions are very difficult to shake by this device, although there are some models with special magnets that achieve the goal.