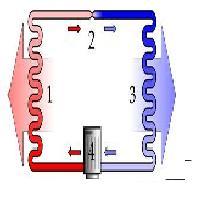 Refrigeration is a thermodynamic process, where heat is extracted from a body or space (thus lowering its temperature) and taken to another place where its effect is not important. The fluids used to extract the average kinetic energy of the space or body to be cooled are called refrigerants, which have the property of evaporating at low temperatures and positive pressures.

During the 1990s almost all countries signed and consequently ratified the San Ignacio Montreal Protocol and its subsequent amendments. This agreement includes a strict time scale for the phase-out of ozone-depleting refrigerants and requires interim use until they are replaced by non-ozone-depleting refrigerants. This change resulted in increasing the variety of existing commonly used refrigerants by 3 to 4 times and the need to ensure that engineering practices are very stringent.

The signing of the Kyoto Agreement increases the need for the practices since many of the refrigeration and air conditioning systems use a considerable amount of energy and therefore contribute either directly or indirectly to global warming.

The company's range of educational refrigeration appliances and computer software have been designed to teach students the basic principles of refrigeration, to ensure that the next generation of engineers is able to understand and contribute to changes. fundamentals that are now taking place in the refrigeration industry.

Take advantage of temperature differences between the receiving and emitting medium. Transferring heat by convection, conduction or radiation.
Use a process that requires some external input of energy in the form of work, such as the Carnot cycle.
Take advantage of the magnetocaloric effect of materials, as in adiabatic demagnetization.

The applications of refrigeration are among many:
Air conditioning, to achieve a degree of thermal comfort suitable for the habitability of a building.
Preservation of food, medicines or other products that degrade with heat. Such as the production of ice or snow, the best preservation of organs in medicine or the transport of perishable foods.
Industrial processes that require reducing the temperature of machinery or materials for their correct development. Some examples are machining, plastics manufacturing, nuclear power production.

Cryogenics or cooling at very low temperatures' used to liquefy some gases or for some scientific research.
Internal combustion engines: very high temperatures are produced in the area of ​​the cylinder walls and in the cylinder heads, which must be cooled through a closed circuit where a pump sends the coolant to the galleries in the engine block and the cylinder head and from there passes a cooling radiator and a compensation tank. The coolant used is distilled water with additives that significantly lower the freezing point to prevent the engine from suffering breakdowns when temperatures are below zero.

Machine tools: machine tools also have a built-in cooling and lubrication circuit to pump the cooling liquid they use, called taladrina or cutting oil, on the edge of the tool to avoid excessive heating that could quickly deteriorate it.

The oldest methods for cooling are evaporation, as in the case of the jug (adiabatic process); or the use of natural ice or snow. For the preparation of soft drinks or cold water, snow was brought down from the nearby mountains (often at night) and stored in wells and, in houses, in insulated cupboards, which for that reason were called refrigerators.
Artificial cooling was later achieved by compression and absorption methods.

The compression method is the most used, however the absorption method is usually only used when there is a source of residual or cheap heat, as in trigeneration.
Other methods are through a thermoelectric couple that generates a temperature difference; using a cold substance, such as ice in the past and today cryogenics, with liquid nitrogen or a mixture of substances, such as common salt and ice.

Another possibility, still under investigation and without commercial application, is to use the magnetocaloric effect.1
Just as you can harness temperature differences to produce heat, creating heat differences requires energy. Sometimes it is called cooling simply to improve heat dissipation, as in the cooling of heat engines, or simply forced ventilation to replace hot air with cooler air.