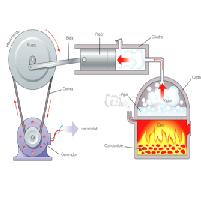 A thermodynamic system is a part of the Universe that is isolated for study.

This isolation can be carried out in a real way, in the experimental field, for example a heat engine, or in an ideal way such as the Carnot engine, when it comes to addressing a theoretical study.

Thermodynamic systems are classified according to the degree of isolation they present with their environment. Applying this criterion, there can be three classes of systems:

Isolated system: It is one that does not exchange matter or energy with its surroundings, that is, it is in thermodynamic equilibrium. An example of this class could be a gas enclosed in a container with sufficiently thick rigid walls (walls [adiabáticas]) enough to consider that heat energy exchanges are negligible and that it cannot exchange energy in the form of work either.

Open system: Most of the systems that can be observed in everyday life are included in this class. For example, a motor vehicle is an open system, since it exchanges matter with the outside when it is loaded, or its driver enters its interior to drive it, or it is supplied with fuel when refueled, or the gases it emits due to its exhaust pipe but also exchanges energy with the environment. You just have to check the heat given off by the engine and its surroundings or the work it can do carrying load.

There are other criteria for classifying systems. The homogeneity that a system can present is one of them. This is how we talk about systems:

Homogeneous, if the macroscopic properties of any part of the system are the same in any part or portion of it. The state of aggregation in which the system can be presented can be any. For example, a solid, pure substance that is crystallized forming a single crystal is a homogeneous system, but it can also be a certain portion of pure water or a solution, or a gas retained in a closed container.

Heterogeneous, when the above does not occur

In Thermodynamics, the systems chosen for study usually have a special simplicity. The systems that are studied are, generally, those whose state is perfectly determined by a matter of state variables. For example, the state of a gas can be perfectly described with the values ​​of its pressure, its temperature and the volume it occupies. In this class of systems, the variables are not absolutely independent, since there are links between them that can be described by equations of state.

Animation: contraction and expansion of a gas in a closed system of moving walls.

For the description of the existing relationships between thermodynamic systems and their environment, the thermodynamic contour is defined as a set of thermodynamic walls closed to each other in such a way that, in addition to delimiting and confining the system, they inform us about the balances that the system could have. system with the rest of the universe.

Adiabatic: They do not allow the passage of thermal energy.

Rigid: They cannot move, that is, they do not allow the volume of the system to change.

Waterproof: They do not allow the passage of matter.

Diatermas: They allow the passage of thermal energy.

Mobile: They can move.

Permeable: They allow the passage of matter.