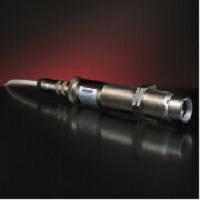 A pyrometer is an instrument used to measure, by electrical means, elevated temperatures above the range of mercury thermometers. This term encompasses optical, radiation, resistance, and thermoelectric pyrometers.

Pyrometric measurements, accurate and comfortable, are becoming more and more widespread, even for relatively low temperatures (of the order of 800 °C).

From the point of view of industrial temperature measurement, thermal wavelengths range from 0.1 microns for ultraviolet radiation to 12 microns for infrared radiation. Visible radiation occupies an interval between the wavelength of 0.45 microns for the violet value, up to 0.70 microns for red.

Radiation pyrometers for industrial use were introduced around 1902 and have been constructed in various forms ever since. The means of focusing the radiation that reaches it can be a lens or a concave mirror; the instrument is usually "fixed focus" or adjustable in focus, and the sensing element may be a simple thermoelectric couple in air or vacuum bulb or a multi-junction thermoelectric cell in air. The electromotive force is measured with a millivoltmeter or with a potentiometer, with character indicator, indicator and recorder or indicator, recorder and regulator.

The concave mirror is sometimes preferred as a means of focusing for two reasons:

• The source image focuses equally well at the receiver for all wavelengths, since the mirror does not produce chromatic aberration, while the lens can give a sharp image for a single wavelength.

• Glass or vitreous silica lenses completely absorb a considerable part of the long wavelength radiation. The radiation reflected by the mirror differs little in mean wavelength from that incident on it.

The following FIGURE shows schematically the optical ranges of a modern mirror-type radiation pyrometer. Radiation enters, from a source, through a glassy silica window A, is reflected by spherical mirror B, and is brought to a focus on diaphragm J, in the center of which is an opening C. 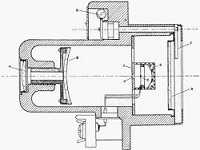 Radiation passing through C is reflected by spherical mirror D to receiver E, where an image of C is formed. The surface of J is slightly bleached with magnesium oxide so that it diffusely reflects enough light to make the image visible. source when viewed through a lens H placed behind B. The instrument is oriented by the observer so that the image of the portion of the source to be viewed covers aperture C. Since B does not produces no chromatic aberration and very little spherical aberration, the source image, placed at the distance to which the mirror is focused, is very sharp and a very definite portion of the image can be made to cover C.

The ratio of source distance to required source diameter (distance factor) is approximately 24 to 1 for distances greater than 24 inches. At 24 inches, the font diameter must be at least 1 inch; in 48 inches, 2 inches, etc.

For shorter distances from the source, the distance factor is larger.

For distances greater than 20 inches, the instrument can be used as "universal focus" if it is properly focused and graduated for a distance of 24 inches.

Fixed inlet diaphragms provide pyrometer span adjustment over wide limits. The upper end of the range can be 1000 to 1800 C, and even higher than 1800 C, if needed, for a maximum emf of 20 millivolts.

In the upper half of the amplitude, source temperature changes of the order of 0.1% of the measured value are easily discovered.

The time required to achieve equilibrium after a large and rapid change in source temperature depends on the heat capacity of the receiver and how quickly it dissipates heat. This response time in the instrument we have described is 1 to 10 seconds, depending on the size of the receiver.

The radiation pyrometer may be recommended instead of the thermoelectric in the following cases: