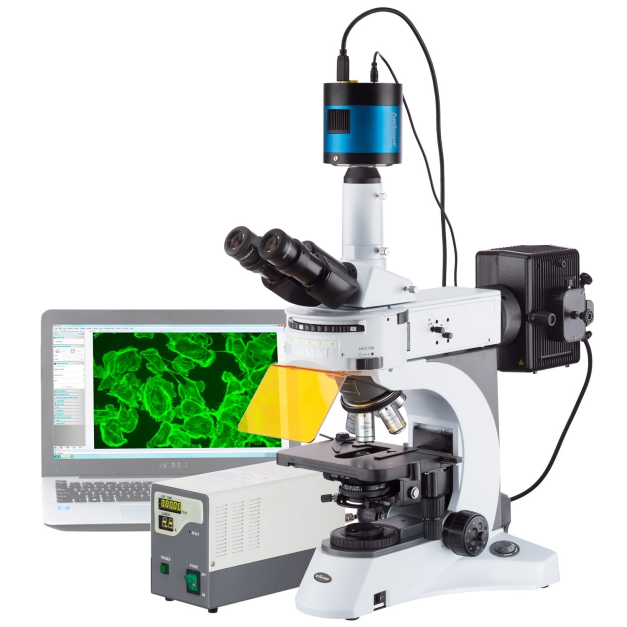 Fluorescence microscopy is an optical method for studying objects that uses the phenomenon of luminescence or glow. It is based on a physical process in which a substance absorbs light of one wavelength, and immediately after that emits light of a different wavelength. Compounds or structural fragments with such properties are called fluorophores.

A bit of history

Fluorescence was first discovered by John Frederick William Herschel in 1845. He noticed that by itself, a colorless and transparent solution of quinine in sunlight radiates a rich sky-blue color. Herschel's discovery interested the British scientist George Gabriel Stokes. He continued his research and found that the fluorescent emission (emission) of an object has a longer wavelength than the light that initially excites the object. The difference in the wavelengths of the maxima in the absorption and fluorescence spectra, discovered by Stokes in 1852, is called the Stokes shift.

The first fluorescent microscopes were built by August Köhler (1904), Karl Reichert and Oskar Heimstadt (1911), and Carl Zeiss and Heinrich Lehmann (1913). At first, scientists conducted research only with substances that had their own fluorescence or autofluorescence. Such substances include, for example, the amino acid tryptophan, which is part of most proteins.

In the 1930s the first fluorescent labels or probes for marking non-fluorescent objects appeared. In the 1950s Albert Koons and Nathan Kaplan developed a method for detecting antigens in tissues using antibodies labeled with fluorescent dyes.

Today, fluorescence microscopy is used for a wide range of applications, and the equipment and methods are far superior to those that started it all. Scientists have high-resolution microscopes and a variety of highly selective fluorescent probes at their disposal to label a variety of objects. (We recommend the article: "Modern methods in genetic analysis")

Most of the cell's components are colorless and not clearly visible under a normal microscope. Fluorescence microscopy successfully copes with this problem. The structures needed for study are isolated by fluorescent labels - compounds that absorb light of a given wavelength and, after a short delay, emit light with a longer wavelength than they absorbed. For example, if ultraviolet light is absorbed, then blue light or light with even longer wavelengths (green, yellow, red) will be emitted. The increase in wavelength is due to the fact that energy is lost in the process of absorption-radiation, so the emitted photon has less energy than the absorbed one. The closer the light is to the red zone of the electromagnetic spectrum, the greater the value of the wavelength and the lower the photon energy.

Each fluorophore has its own specific absorption and emission spectra, depending on the structure of the molecule and its environment.

Fluorescence microscopy is superior to research methods in which objects are stained with light-absorbing substances. When using optical dyes, the amount of absorbed light differs slightly from the background, so the resulting image is difficult to see with low contrast. And in the study using fluorescence, you can even see individual macromolecules. Fluorescent microscopy makes it possible to selectively study individual components in complex biomolecular complexes.

To see the location of only fluorescent objects, the emitted light is cut off from the excitatory light by a special barrier filter. In this case, the structures labeled with fluorescent probes appear on a black background.

How does a fluorescent microscope work?

A fluorescence microscope is an optical microscope that uses fluorescence instead of or in addition to examinations in reflected and absorbed light. With its help, even very small objects with a size of about 5 nm are studied. 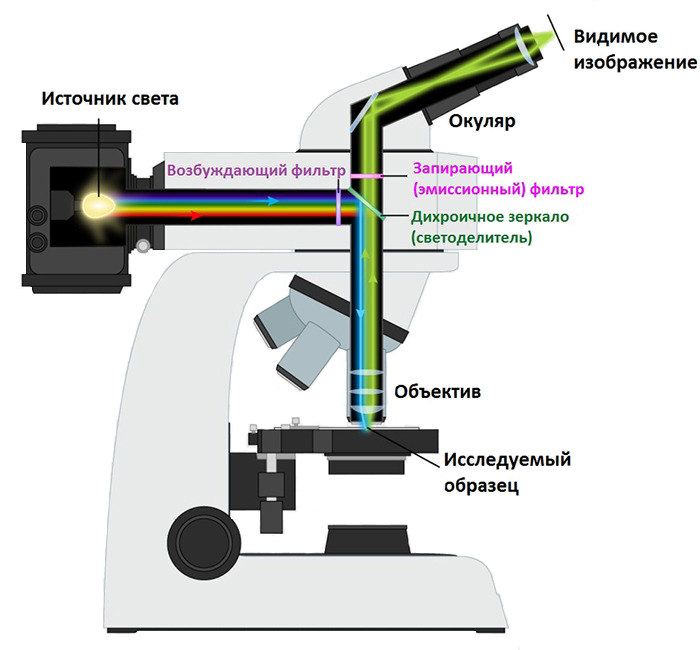 The main elements of a fluorescence microscope:

By blocking "extra" luminescence, including sample and system autofluorescence, optical filters in a fluorescent microscope produce the darkest background and a bright, high-resolution, high-contrast image.

Fluorescent microscopy is used to study the properties of organic and inorganic substances in materials science, biology, medicine, and physics.

The main field of application is cell biology, especially neuroscience. Fluorescent microscopy allows you to clearly see certain structures in the cell, obtain quantitative and qualitative characteristics of the interactions within the cell, analyze morphology, intracellular physiological changes.

Many fluorescent probes have been developed to study processes in the nucleus, mitochondria, endoplasmic reticulum, and synaptic vesicles. There are probes that can bind to proteins or integrate into lipid structures. (We recommend the article: "Modern approach to the cultivation of microorganisms and cell cultures")

With the help of fluorescent microscopy, infectious diseases, blood cells, bone marrow are examined, photoreceptors of the retina are studied. 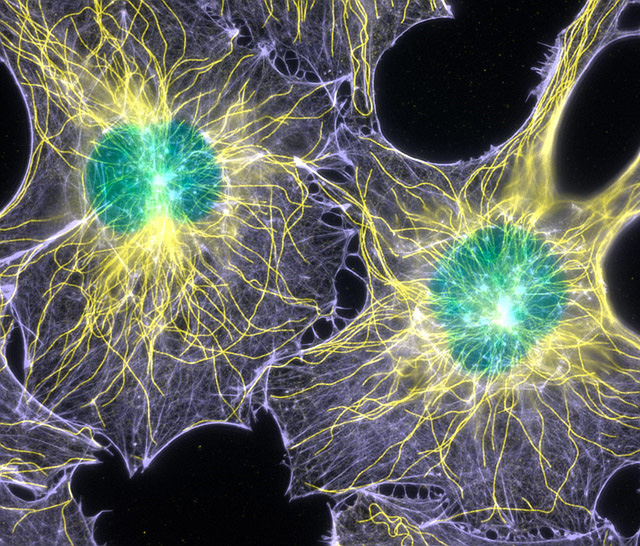 The advantages of the method are high sensitivity, the ability to combine fluorescent probes and stain individual objects in the test sample with different colors, simultaneously track several types of macromolecules, and perform multiplex analysis. These approaches are used to study the structure and functions of cells, the organization of cellular structures, and the mobility of objects.

Limitations of fluorescence microscopy include loss of fluorescence capability or photobleaching due to accumulation of damage from electrons excited by fluorescence, as well as phototoxicity for some objects. To reduce phototoxicity, laser scanning microscopes with non-linear optics are used, which excite fluorophores with wavelengths close to infrared light. This significantly reduces the toxic effect and increases the time of the study.

In modern fluorescence microscopes, the image of the object is obtained in digital format. Focusing, object stage height, optics, filters, detectors are controlled by a computer. Optoelectronic technologies are used, with the help of which it is possible to control subcellular structures with special optical tweezers. 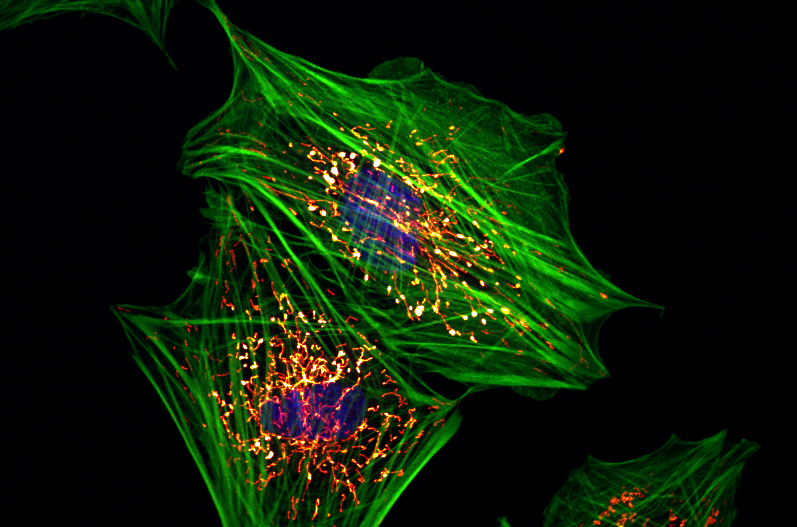 One of the modern variants of fluorescence microscopy is confocal microscopy using laser light sources. Its feature is the use of a pinhole diaphragm, which is placed in the image plane and limits the flow of background diffused light. Laser confocal microscopy gives a three-dimensional image of the object, allows you to study the structure, in dynamics to study the development of cells and tissues, including living ones.

Despite the fact that the foundations for the development of modern fluorescence microscopy were laid more than 100 years ago, interest in this fast, accurate, and relatively simple method still persists. It is widely used in various fields of science and laboratory diagnostics. Over the past decade, from 5,000 to 10,000 scientific articles on the study of objects and processes by fluorescence microscopy have been published annually.