¿What is method development in hplc? Chromatography advance 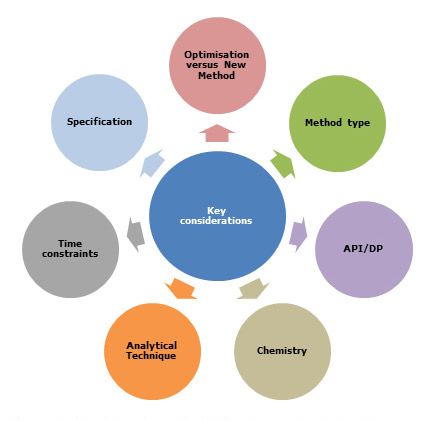 What is method development in hplc?

INTRODUCTION
The number of drugs introduced into the market is increasing every year. These drugs may be either new entities or partial structural modification of the existing one. Very often there is a time lag from the date of introduction of a drug into the market to the date of its inclusion in pharmacopoeias. This happens because of the possible uncertainties in the continuous and wider usage of these drugs, reports of new toxicities (resulting in their withdrawal from the market), development of patient resistance and introduction of better drugs by competitors. Under these conditions, standards and analytical procedures for these drugs may not be available in the pharmacopoeias. It becomes necessary, therefore to develop newer analytical methods for such drugs.

ANALYTICAL METHOD DEVELOPMENT
Analytical chemistry deals with methods for identification, separation, and quantification of the chemical components of natural and artificial materials. The choice of analytical methodology is based on many considerations, such as: chemical properties of the analyte and its concentration sample matrix, the speed and cost of the analysis, type of measurements i.e., quantitative or qualitative and the number of samples. A qualitative method yields information of the chemical identity of the species in the sample. A quantitative method provides numerical information regarding the relative amounts of one or more of the analytes in the sample.

The steps of method development and method validation

The first four tests are universal tests, but the specific tests such as particle-size analysis and X ray diffraction are used to control specific properties of the active pharmaceutical ingredient (API) or the drug product.

The most widely used methods for quantitative determination of drugs and metabolites in biological matrices such as blood, serum, plasma, or urine includes

Today TLC is rapidly becoming a routine analytical technique due to its advantages of low operating costs, high sample throughput and the need for minimum sample preparation. The major advantage of TLC is that several samples can be run simultaneously using a small quantity of mobile phase unlike HPLC thus reducing the analysis time and cost per analysis .An enhanced form of thin layer chromatography (TLC) is called as High performance thin layer chromatography (HPTLC). A number of enhancements can be made to the basic method of thin layer chromatography to automate the different steps, to increase the resolution achieved and to allow more accurate quantitative measurements.

HPLC-UV diode-array detection (DAD) and HPLC-MS techniques take advantage ofchromatography as a separation method and DAD or MS as identification and quantification methods. The HPLC equipment consists of a high-pressure solvent delivery system, a sample auto injector, a separation column, a detector (UV or DAD) a computer to control the system and display results.

Sample preparation
The purpose of sample preparation is to create a processed sample that leads to better analytical results compared with the initial sample. The prepared sample should be an aliquot relatively free of interferences that is compatible with the HPLC method and that will not damage the column. The main sample preparation techniques are liquid-liquid extraction (LLE) and solid-phase extraction (SPE). In these methods the analyte of interest was separated from sample matrix, so that as few potentially interfering species as possible are carried through to the analytical separation stage.

¿What are the Applications of Thin Layer Chromatography?